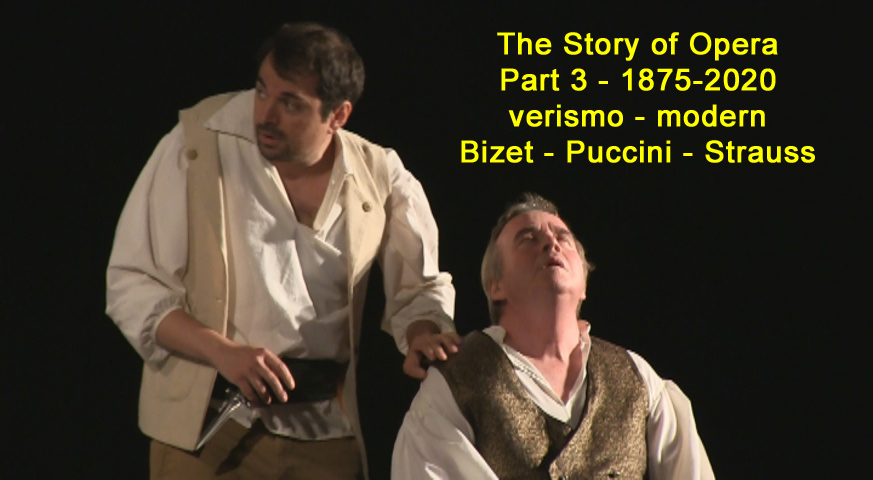 This is part 3 of a 3 part series on opera presented by composer, conductor and educator Dr. Robert W. Butts and covers the period from 1890-2000.  It will include a talk combined with musical selections.

In the 1870s, a movement away from Romanticism toward Realism sprung from France, most notably in the opera Carmen (1875) by Georges Bizet.  The style quickly spread to Italy and inspired some of the most popular and beloved of all theatrical works in a style that has come to be called "Verismo." The realism elements most inspired Italian composers like Ruggiero Leoncavallo and Pietro Mascagni.   The most successful and still most popular of all opera composers in this style was Giacomo Puccini.   At the same time, lighter works - called "operetta" - also became popular,  especially the works of Johann Strauss and Gilbert & Sullivan.  In the 20th century, opera was influenced by ideas of modernism, extreme realism, psychological depth, and diversity.   While modernism led to a lesser number of standard operas composed, it nevertheless led to a period of increased opera composition and performance. Today, more new operas are being composed and premiered than ever, with styles ranging from the most modernistic to Broadway type songs.

You can register for one or more programs in the series.

This program is made possible with the support of the Friends of the Livingston Public Library.