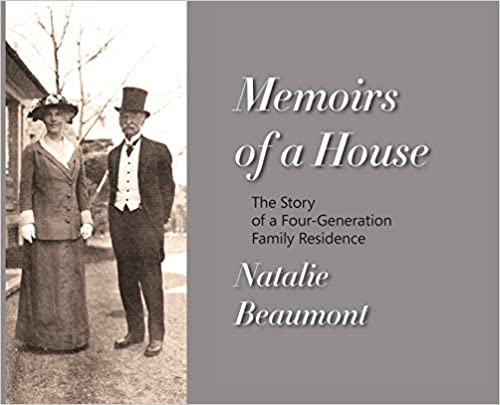 Local author Natalie Beaumonth will be reading from and discussing her latest book, "Memoris of a House"

This will be both in-person and Zoom.

When Nathaniel Norton--who had studied law at Yale but became the head of the real estate department of Met Life instead--bought a house in Englewood, New Jersey, in 1908, he may or may not have imagined that his family would occupy it uninterrupted for four generations. To us, it's inconceivable. It wasn't unheard-of then. This book describes in intimate, highly readable detail what being in such a family was like. It is a very old family. Norton was born in 1839, a century before the author. "In 1639," she writes, "a Thomas Norton, or Norville, emigrated from Guilford, England, to Guilford, Connecticut. . . .

Six centuries before that, in 1066, his ancestor Le Seigneur de Norville had sailed with William the Conqueror from Normandy to England. The Seigneur, a constable, had married into the house of Valois. Those were my maternal ancestors. My paternal ancestors also came to England with William I, in particular Robert of Meulan, whose surname was Beaumont. Another line of Nortons descended from Baldwin I, Count of Flanders, who married Judith, daughter of Charles the Bald and great-granddaughter of Charlemagne, and produced Matilda, later the wife of William the Conqueror."

This history has contributed profoundly to the habits of mind, the sense of graciousness, and the dry wit of successive generations of the Norton, Hazelton, and Beaumont families. And it achieves a rich, incisive expression in the hands of Natalie Beaumont, author of The Short Side of Paradise (Full Court Press, 2015), an earlier memoir in the same breezy, nonchalant narrative style.